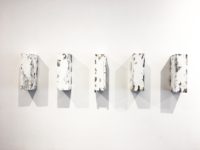 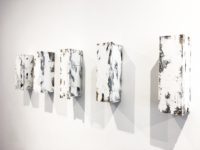 Sebastião Castelo Lopes (b.1994, Portugal), lives and works in Lisbon. He graduated from the University of Fine Arts at the University of Lisbon in Drawing, in 2016 and received his masters degree at the Wimbledon College of Arts from the University of Arts London, also in Drawing, in 2017. He participated in a series of exhibitions last year (2016), individual and collective, in the United Kingdom and this year was selected to participate in the Lisboa Budapest Lisbon Art Residence of the Lisbon City Hall. These objects are made of pieces of wood assembled with screws and then covered with oil or acrylic wall paint. The title of each of the pieces alludes to the material qualities of the object, intending to question the identity of the participants in the relationship Piece of Art-Observer. In other words, to what extent the object is work and whether is the quality of the material and the technique applied in the construction of the object, proportional to the quality of the work. The great majority of the materials used in the construction of the pieces are considered of low quality (DIY paints and wood found on the streets), so the questions related to the ‘difficulty of the technique used’ and the ‘quality and cost of the materials’ are highlighted. Thus, sometimes the discussion of the relevance of the object is superior to that which concerns its aesthetic qualities. It is important to repeat the idea that the pieces are mostly made of street wood and, after being displayed in a gallery, are usually displayed on the street for a certain time. A cycle is thus created: from the street to the studio, to the gallery, and again to the street. This cycle idea ends up also questioning the relevance of the space where the objects are displayed.