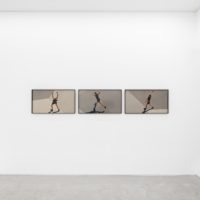 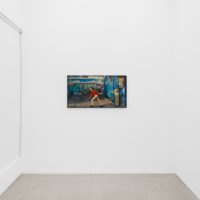 ENIGMA is a transmedia work conceived with three points of support: urban places, performances, an opera song. Historical and contemporary places in Luxembourg, the actions-performances of two young women who “interpret” these places, a “song of the Sirens” which inhabits the places but also the bodies of the actresses-performers. The performance triggered by the encounter with the place is a secret language that we must decrypt and translate.

This artistic project is materialized within the gallery by a video-photo installation composed of 4 moving images and a series of 12 photographs. It is created from the elements of the film, deconstructed and reinterpreted in order to produce a spatial device with the exhibition space itself.

Pierre Coulibeuf is developing a transdisciplinary project: he produces experimental fictions (on analog film) which invest the field of art and where changes of identity affect the universes as well as the artists inspiring his works. His films are presented both at the cinema and, recomposed, in the form of video-photo installation in the international network of contemporary art. Coulibeuf’s works art part of main public and private collections in the world.
In 2013, his exhibition at YUAN Space, in Beijing, was selected for the Award of Art China / AAC, in the category of the most influential foreign artists in China (with Andy Warhol, Marcel Duchamp, Araki, Shirin Neshat). In 2019, he won the Résidences Sur Mesure of the French Institute in Paris (Visual arts).