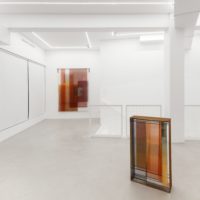 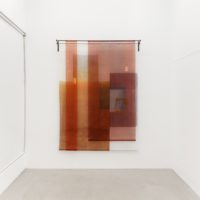 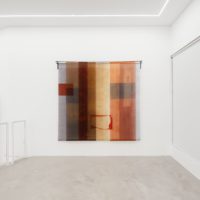 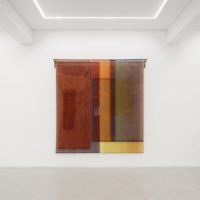 Silk and cotton an polyester dyed and printed, welded metal

Silk and cotton an polyester dyed and printed, welded metal 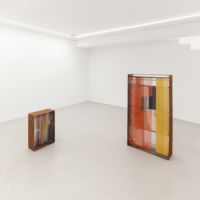 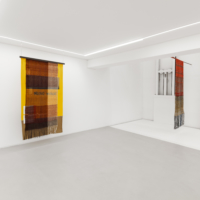 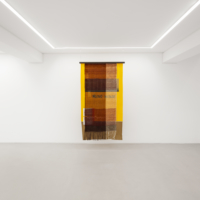 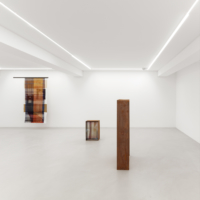 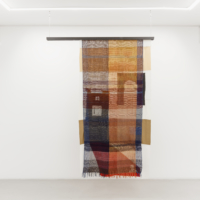 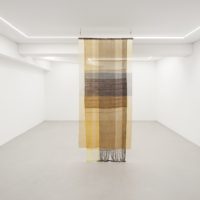 It’s about what is « in between » things, people and memories. Its about objective presence in physical spaces, that merges into a pile of layered thoughts.
This is a set of works, that emerge from processes of dyeing, printing, metal working, and cut-outs.
Assuming the fabric as a body human-like, where one single thread is primarily essencial and a changing agent on the next one, this is a series of ‘postcards’ that defeat its viewer and change with him. These are a description of the traces left by our movement.
They are works made of windows and the overlapping of events that transform colour into constant change
Gazing to see something and overlaying to perceive it.

It’s no accident that writing appears as if webbed over the page. With a little luck it might save us from falling into the white A4 abyss. In the West, reading goes from left to right and top to bottom, following horizontal rhythmic lines which are invisible until they sustain the printed sentences. We follow these simple rules, but words aren’t often as obedient. Words don’t care to be stuck to the text mesh, and not all ideas will fit into grammar either. One must jump over the page, break through, tear the cloth, sway to the unbound place where things exist on their own, unwritten, unsewn. Reach into substance. The café where I’m sitting is on a long narrow street, intersected by three or four other perpendicular streets. The city too is a tangled labyrinth. I walked through it from Maria’s shared studio where she works. I ask for an Americano and think about the gesture of unfolding fabrics on the floor, and lifting them high up with arms raised: these fabrics are made to travel across, to see between and through them. Eyes won’t rest or hurry. Sometimes color is mistaken for light. Nothing alludes to anything else, each thing is precisely what it is: ribs are ribs, grooves are grooves, tones are tones, lines are lines. It’s almost summer. I have no idea where this is going as I write it, meanwhile my Americano gets cold. This street is even more deserted than the Sahara. It’s no accident that the word color (cor) is akin to the word heat (calor). Two words, one abeyant to another. In Maria’s work too, it’s almost summer. It will still be warm in there, as winter comes. A painting does not lose heat. It might even burn you. These works are porous. Air moves through its shapes, from here to there, round and round. Streets expand so that summer comes through. Gazes are tactile. Eyes are never static, even while we’re fast asleep. It’s not by chance that (in portuguese) we say: city plan(t). Shade waters silence under an awning. Los Angeles is perhaps hotter than Lisbon. Seville hotter than the Sahara. It’s no accident that the place where trains stop are called stations (in portuguese we use the same word for seasons and train stations). Maria’s works flee from the wall even if they won’t move anywhere. I get the feeling she is more into places where trains won’t stop at all. Membranes both separate and unite. It’s not by chance that (in portuguese) we say: foot palm (plant). The handling of a loom is musical. Windows are wide open. Hands unfold this piece of paper while unknowingly each gesture becomes embedded by the A4 format. We gotta escape. Our body plunges in. There’s concentration in pigment. What’s the substance of transparency? Videos float upon luminosity. It takes such a long way to get here. Rust needs time to become lightness. Distance traveled tints the fabric. In an instant everything is ready. A painting is never done, it has only just begun.