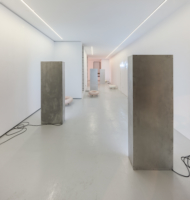 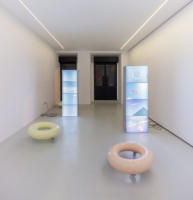 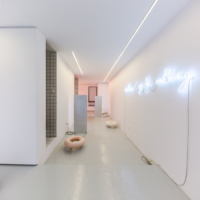 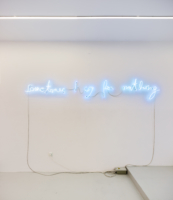 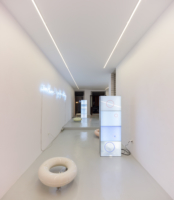 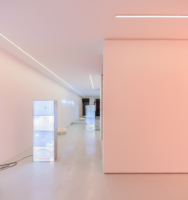 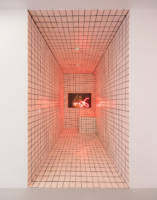 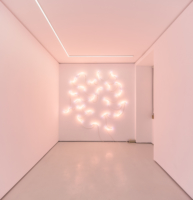 Dear visitors of this exhibition,

mirror
I invite you to fix your hair and to shake it off; you have entered a place that is a mirror. All you can or cannot see in this place is the inalienable mirror of yourself. These objects that are in this place (and it is a place because there are a history, a feeling and multiple narratives that belong to it and, although it is transitory, it is above all a turnover) are absolute signs of and for those who see them, and can lead you to a pleasurable, or horrifying, understanding of what is, or not, as a person who exists in the world.

production
This place becomes so because there is in the poetics of its author-artist Hugo Cantegrel a split between the moment of creation and the moment of exhibition, which is revealed in these objects as an assimilation of what is sensitive, the intuition, and of what is thinkable and articulable, which leads him to see these objects as modules of meaning and the exhibition as a place of coincidence between various realities – including the reality of fiction. This movement also leads us to the overlap of the figure of the artist with the figure of the curator, one time after another, and both in superposition in a space. Cantegrel rethinks the objects as soon as they leave his body and become external to him and, as in a game – and what life carries from it – establishes the rules that allow their reading. The joining, meeting or gathering of one with another allows you to be the person who combines signs and symbols and shapes but also opens space for those who come and see, without having already done so, to position themselves in the same place of authority before them. At the level of the narrative of the exhibition – what it says – we are all co-authors, we mirror ourselves on the ceramic surface, in the glow of the neon, in the languid eyes of this woman.

technique
This relationship between the production and the reproduction and rethinking is what makes possible a discussion beyond the technicalities of this exhibition. It is not only Cantegrel’s assumption of freedom and autonomy of the work before the artist, of his hand, of his doing, but also his exquisite, and/or cold, industrialized production. In which there is no fault. Due to the absence of the failure that could make us stumble in vain – important or unimportant – of technique and other sensibilities, the discussion is allowed elsewhere, which is perhaps a symptom of the heritage of conceptual art that Cantegrel carries. It is also in the same technical movement and in the exquisite production of highly aestheticized objects, pleasant, therefore, to the eye, that Cantegrel will be able to accumulate feelings that are presumed, from this place of speech, collective and related to the individual narratives of each visitor of this exhibition. [Which ones?] That we are all waiting, that we all think about death, the unknown, the obscure, the others, in childhood, and all the layers of meaning are mixed up until the haughtiness of everything makes some tears shed. The origin? Under a rock another rock

to be
Hugo Cantegrel presents the exhibition JUST BEFORE WE BEGIN, but it is good to note that even before we started – and also Hugo, and also this exhibition – everything had already started. And, also, that only long after it had started, it risked being, already after its execution. Even before this text began, it had already begun. That’s how you start, starting before you start. To take the first step is first of all to learn how to take the first step, so the origin of the first progress is unknown. The same happens with being, with the artist who exercises it, and with the time that allows it. And what time is like, how it is, how it is exercised. Fiadeiro speaks of real time as the one which goes from the moment in which one is affected to that in which we relate in a non-passive way with that affection, sometimes only one-thousandth of a second. The differential necessary for time to be simultaneously a collective norm but an absolutely individual experience (again I parallel this image to the mode or to the how of this exhibition). Cantegrel of this moment just before we start, evoking a corporate environment, tells us that a particular space-time is created when someone says “before we start I just wanted to…”, a space-time based on waiting, on suspension. And where this exhibition, place and mirror, is based.

suspension
From my image in this mirror that JUST BEFORE WE BEGIN reflects, I can’t help but see the suspension, latent in all the pieces. It is not contradictory that the pieces that give weight to this exhibition, the grey monoliths we face when entering, are the same ones that make it levitate, or ascend. In Unidentified ufo, a round sculpture that assimilates various narrative powers, there are two very strong readings; that of the monolith seen by those who access this exhibition and that of the image of those who return to their lives, at a turning point in the exit of this exhibition. These vertical blocks evoke the sky and the unknown, celebrating them in a way that always evokes uprise. It is also curious that other works evoke in me these two metaphors of visibility; that of the sky that descends the gaze and that of the gaze that ascends to the sky. A piece by Alexandre Estrela, where he takes a field of monoliths as a score to be read – on an astral scale? – and John Baldessari’s best of thirty-six attempts to get a square with four oranges being thrown into the air. Also these four oranges, considered from an unclear angle could be read as a UFO, something seen in the sky and misunderstood or unexplained from a certain perspective. This evocation, evident in my mirror, of the artist of mystery and science fiction, and of the artist of concrete humour be enlightening as to the narrative and associative accumulation of Cantegrel’s exhibition.

read
The duplicity of this piece gives us the motto for reading all the pieces in the exhibition: although being, it is to the context that the readings belong. The incomprehension or non-relation with the simple may generate belief or faith, in what it may come from, and where it may come from, but also fear or distrust. The same for floats, playful, reminiscent of paradise beaches and loud laughter of children, but also an object of salvation and a unique symbol of our bourgeois responsibility to rethink ourselves before the many who cling to them without amusement, and these with whom we can neither play nor save ourselves, perfect, esteemed as a symbol of all their consequences. But also the bug of this exhibition, 404 (an error occurred), the piece, confesses Cantegrel, which is truly personal, the one that does not evoke symbols, but that gives us the possibility of creating them, of giving us to see the deconstruction of the forms that we have been passing through until now, and that shape our imaginary; the abstraction that echoes. What echoes? As many sounds as we bring.

aside
Many images evoke lines in me, and also because poetry lives in the house that Cantegrel’s work is. It seems fair to me to say goodbye to the visitors of this exhibition with two verses by M.G.Llansol, which I always greet, “I dazzle myself when time suspends, / and allows me to stop contemplating the space without time”.

Remember that we will only be forgotten when one will forget our forgetfulness.