On The One Hand / On The Other by Carlos Manuel Oliveira 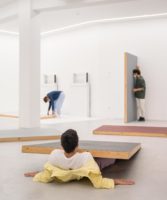 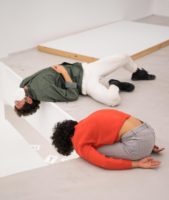 ON THE ONE HAND / ON THE OTHER by Carlos Manuel Oliveira
With: Daniel Pizamiglio, Vânia Doutel Vaz, Ana Trincão, Bruno Brandolino, Adriano Vicente, Tiago Gandra

An iteration of the piece “of disconcert, on the one hand / of adventure, on the other”, presented at the Nova-Velha Dança cycle in 2017, “On the one hand / On the other” is a second incursion into the relationship between action and knowledge, aimed at probing dependencies between the two in bodies that learn and unlearn and at pondering the latter’s potentialities in relation to how knowledge is regulated. There is an interest in how knowledge arises together with the act of its enunciation; in how body and context, potentiality and possibility, intersect to situate what happens; or in how, from a disconcert between memory and action, that which is known loses its sense. There is also the confusion between what is known in a certain way, what is known in another, and what is unknown because it was forgotten. Reason, intuition, sensation and memory intertwined in each other through multiple synesthesias. There is an interest in how experiencing a lack of coordinates is key for learning, will and chance being means for knowledge to come; in how one learns in the absence of pedagogies, and how this elicits the emergence of singularities. There is the unconscious, of which we know little, and there is also the other, with capital O or not even; strangeness and openness both beyond and not beyond recognition. Overall, this is a study about the very conditions of studying. — Carlos Manuel Oliveira

The performance can be experienced for any given duration within the presentation hours. The entry is free and subject to room capacity.