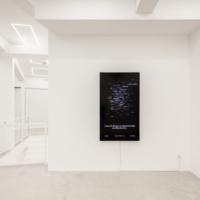 Portugal In The Clouds, 2021 | Rudolfo Quintas 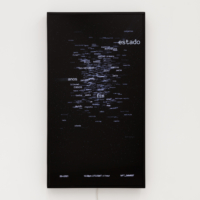 Quintas has a deep interest in decolonizing body language and corporal behaviour, frequently designing algorithmic and computer based installations that involve cognitive feedback processes for the self-exploration of the audience. This research is presented in artworks such as Displacement (2004), Absorption (2014), Black Hole (2018), among other performative works such as Swap (2005), Burning the Sound (2007) or Darkless (2016). Described by curator Verónica Metello as ‘Sensitive-Contexts”.

In the past years, Quintas took these feedback processes to a greater scale by portraying society in data paintings and installation that speculate the relation between infodemic and mental health with News Feed (2019), KEYSTONE-I-II-III-IV (2019), Portugal In The Clouds (2021). This body of work has earned national and international distinctions by the way of grants, artistic residences, scholarships and art prizes such as the DGartes/ Portuguese Ministry of Culture and the Transmediale Distinction Award at the Transmediale festival in Berlin. The work is published in Performance Research (Routledge), research papers as NIME – New Interfaces for Musical Expression, and art editions such as the “Younger Than Jesus: Artist Directory” co-edited by New Museum New York and Phaidon Press among others.