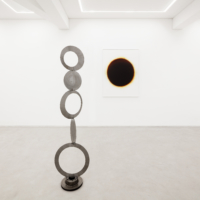 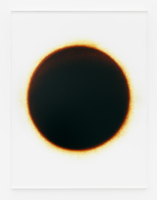 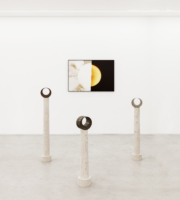 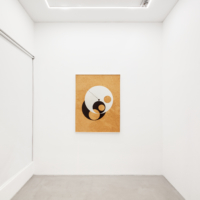 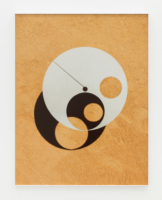 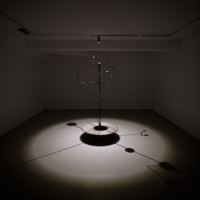 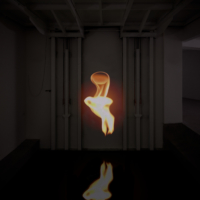 Detail of Equation for an Ellipse, 2021

In 1880, amateur scientist John Rand Capron wrote to the editor of Nature journal to report the appearance of various circular spots emerging out of flattened field crops. Failing to uncover their origin, he advanced the idea of a cyclonic wind action. A century later, what are now called “crop circles” have multiplied, and so have theories developed to explain them. From subterranean forces to extraterrestrial signals, fantasies around these phenomena shed light on a broader fascination for circular visions. Intrigued and herself affected by a common attraction to these shapes, Clara Imbert engaged in composing
her own landscape of cryptic patterns and non- identified objects. For her first solo show, she set out to explore circles and their variations – until rounding them up turned into obsession.

Much like John Rand Capron, Clara Imbert is a science enthusiast. Drawing inspiration from essays on atoms, cells and stars, cyclical time and loop spaces, circular motion and centripetal force, she approaches formulas and symbols as fragments of visual poetry. And it is possibly because she prefers creative experimentation to so-called discoveries, that some of her artworks seem to reinvent common tools of time and space: a sundial without proper pointer, an hourglass deprived of sand, the orrery of an unknown system standing on a found piece of metal gearing. Predictably, the artist’s love of science includes science fiction. Her sculptures, photographs and installations could stand as testimonies of a parallel reality, one which would raise fragile totems and craft iron talismans. One, perhaps, threatened by an impending apocalypse, as suggested by a burning meteor floating above an artificial pond. Yet even without going so far as to speak of worlds ending, Clara Imbert’s constellation of works hints at her interest for ruins – ancient or industrial derelict spaces from which she pulls future artefacts. Driven by previous lives and uses, she gifts a new purpose to the obsolete without denying traces of decay. On the contrary, she welcomes irregularities, flaws and cracks into her work in the spirit of choosing balance and reconciliation over a misconception of perfection and binary vision. Finally, she gives space to the invisible and the ineffable, that which cannot be seen, cannot be said, but remains to be felt. Void, also air, matters. It allows for the rise of impalpable shadows and for a sphere to defy gravity.