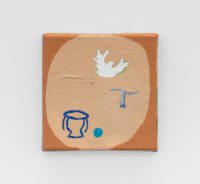 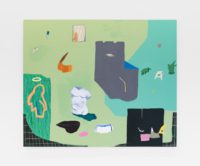 This painting doesn’t talk about you, 2019 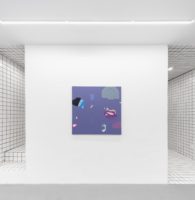 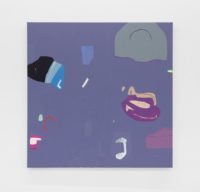 Acrylic, pen and charcoal on canvas 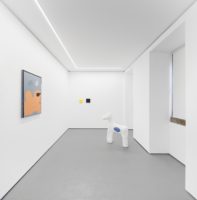 Acrylic and pen on canvas 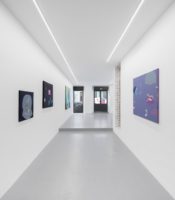 De pequeño me comí un pony (When I was a little boy I ate a pony) is Diego Machargo’s first solo show at Galeria Foco. A year ago, there, it was possible to take a peek at his paintings on the group show programmed for Queer Lisboa International Film Festival (O Virus, 2018). Today, we are given the pleasure to go deeper into his work. Diego opens up the windows to his intimate practice through a group of thirteen paintings and, in smaller number, few sculptures. What he offers to our sight is the selected group from the last two years of his practice. And, if we concede the concept of infinite painting, dear to Diego Machargo regarding how he understands his own labor as painter, also to the sensitisation to what one has lived, they are the latest, fresher images of a life. If I had to point out one main subject in his images, I would say it is relationships, particularly his own relationships (love, sexual, family and with himself). What makes him paint, draw, give a three-dimensional body to his characters and express sentences like the one giving the title to this show, transformative and potencial sensitivity, finds an excuse in them. A cunning and experienced excuse, though. After all, it is because of being sensitive to his relationships, that he allows himself the creation of his imaginary, figures and forms invested with symbolism. Such predisposition has to do with a certain renunciation. In painting, Diego intentionally puts himself at the desire interstice, meaning, between that we decide to eat and that we renounce to eat, in the end, because we want that to be. It is somehow an innocent posture, revealing a certain self-affirmation, a brave one.